Siemens and Electro-Matic along with AUTOParkit will be sponsoring the AUTOParkit #52 Ford Mustang at The Detroit Grand Prix, June 1 & 2, 2019. The event will also feature the cars of the NTT IndyCar Series, the IMSA WeatherTech SportsCar Championship and the Trans Am Series presented by Pirelli. The weekend collectively is referred to as the Chevrolet Detroit Grand Prix presented by Lear and it will feature the Chevrolet Dual in Detroit IndyCar doubleheader.

Join us at the Trans Am Championship Series presented by Pirelli in Detroit, June 1st and 2nd at the Chevrolet Detroit Belle Isle Grand Prix.

Siemens and Electro-Matic along with AUTOParkit will be sponsoring the AUTOParkit #52 Ford Mustang during this weekend. Your invitation includes race tickets for Saturday June 1st or on Sunday June 2nd with grandstand seating for all the races that day. Each ticket allows you access to the paddock (garage area) and our hospitality area. You are welcome to attend Saturday June 1st or Sunday June 2nd.

This will be a great time to see racing first hand and for networking in an exciting environment outside of the office.  You will be able to take photos of the race car and meet driver Lawless Alan. Additionally, Siemens and Electro-Matic, along with AUTOParkit President Christopher Alan will be on-hand to show you and your guests behind the scenes of sports car racing and what life is like in the paddock prepping for the race.

Tickets are limited so please RSVP to Amy Tylutki via email: aktylutki@electro-matic.com by May 15th.

Please include: Name, email, company and the day you wish to attend.

We hope to see you at the races!

Back to Training & Events 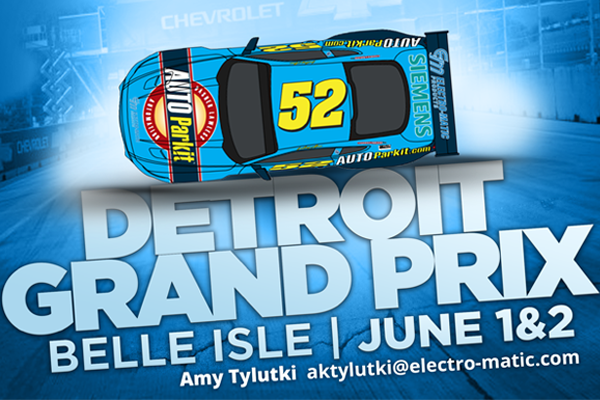